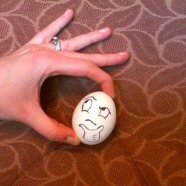 Posted by Apryl Pooley on May 31, 2015 in Activism, Current events, Sexual assault | Leave a comment

I share a lot of current news articles about sexual violence, especially those on campus rape, and I almost always include a caveat to “not read the comments.” As usual, however, I don’t always follow my own advice, and I’ve found myself posting a slew of responses to certain…uninformed…comments on these articles lately. I’ve included here, in block quotes, some of the more eloquent comments I’ve received.

“You really are just blindly supportive of anybody alleging sexual assault. You’re not much better than the deny deny deny crowd. Your sort of stupidity will not gain much empathy for your cause.”

That comment was in response to me saying that, in a state of crisis, a victim needs emotional support and to have their medical needs taken care of, not to be questioned by the police during a time their brain may not physiologically be able to recall a chronological narrative.

But the problem I cannot get past is why there seems to be so many people who are actively fighting against sexual violence prevention and response. They’re like Holocaust deniers. It doesn’t matter how many scientific studies you show them or how many personal accounts you tell them, they simply refuse to believe that people are actually getting raped at significant rates. Why is that?

The radical feminist in me would say that those who benefit from the patriarchy have a lot of incentive to preserve it, which includes discrediting all claims of violence against women. They’re calling the “crusade” against sexual violence a “witch-hunt,” and they’re comparing activists to Nazis:

This new trend of guilty before proven innocent is the same type of mob mentality that landed the jewish (and others) in gas chambers. It’s sickening.

I’ve been hearing a lot of the argument that people have expanded the definition of rape so far that it discredits real rape:

The threshold for something to be considered “sexual assault” has been lowered so far in an attempt to be sensitive to all victims that it is now blurring the lines between a guy that wears a mask and kidnaps people at knifepoint and a drunken frat bro that shouts out what’s on his mind at a stranger.

Redefining the definition of rape for the purpose of politically reshaping the narrative degrades the horror of rape. Should we now classify negligent homicide as first-degree murder? Or first-offense drug possession under 1oz as a RICO drug trafficking offense?

Actually, there is a hell of a lot of ambiguity about what rape and “true” sexual assault is (could some please define “fake” sexual assault?) Unless the sexual interaction that unfolds traces onto behaviors culturally scripted as “rape” (e.g., a stranger jumping out of the bushes with a knife), it is not likely to be acknowledged as such. In fact, 75% of victims who meet the criteria for having experienced sexual assault or rape do not acknowledge they were assaulted. Instead victims may consider the assault a mistake, a miscommunication, bad sex, or an expression of the perpetrator’s excessive sex drive.

Women are constantly told that if they were drinking, if they had previously been romantically involved with their assailant, if they were wearing anything other than a hazmat suit, it’s their fault. So it’s not surprising that victims have a hard time labeling their experience, especially when more than 80% of assaults are perpetrated by someone the victim knows. Not acknowledging what happened as “rape” or “sexual assault” is also a type of psychological defense mechanism to minimize what happened because facing the reality of the experience—especially when it involved a betrayal of a trusted individual—is nearly impossible to live with.

Culturally, yes definitions of rape and sexual assault have changed, but biologically, our brains have always interpreted sexual violence/coercion as a threat. These are all invasions of your Self, and psychologically speaking, your brain doesn’t differentiate between forcible rape, coerced rape, non-penetrative sexual assault, or “butt grabbing,” as these are all violations of a very personal nature and are interpreted as threats to your survival.

Research on how trauma affects the brain provides evidence that the brain interprets sexual violence as life-threatening even when not executed with a weapon or force. I’m not saying that “a guy that wears a mask and kidnaps people at knifepoint” deserves the same legal retribution as “a drunken frat bro that shouts out what’s on his mind at a stranger,” but they are both violations of an individual’s safety and they can both be traumatizing. And I think they do both stem from the same disrespect for certain people’s autonomy and a cycle of abuse.

The attempt to separate “real rape” and “violent rape” from “drunk rape” or “just touching” is what really does a disservice to victims, because all victims experience their assault in a unique way relative to their own life, and nobody should be allowed to tell them what is “worse.”

I’ve heard this “definition expansion” argument from my so-called opponents, but also from survivors, from the president of my university, from the coordinator the office that handles sexual misconduct on my campus. The latter individual actually said to me, “You activists are just making all these girls who get their butts grabbed a party think they’ve been sexually assaulted, and that’s what is perpetuating rape culture.”

Rape culture is not that more people think they are being assaulted because this definition of assault has been expanded. Rape culture is blaming the victim for being too sensitive to being grabbed at a party, for telling someone that what they experienced wasn’t that big of a deal, for telling them that they should have expected that kind of behavior at a college party.

So to praise someone’s beauty or to be persistently interested in them makes you an abuser or a rapist or something?

As with the common defense of catcalling, no this does mean that “if a man initiates any kind of interaction with a woman, she’s going to call it harassment or assault.” There are plenty of ways to engage in sexual activity without disrespecting and violating someone. But regardless of what kind of behavior was tolerated in the past, our society is now stressing the importance of respecting personal boundaries, whether it’s not grabbing someone’s butt without asking, not picking a up a child without asking, or not raping someone. This should all be taken seriously.

There’s more to this issue than patriarchal misogyny. In fact, many of my strongest opponents in this fight against sexual violence have been women. And of course, sexual violence is not just a male-on-female issue.

There are some women who refuse to accept that women can be victims. To them, this is a weakness and any woman who lets a man ruin her life with some bad “sexual” experience is feeble and unworthy of title of Woman. Women are not fragile, but this is the same kind of “just get over it” response that veterans with PTSD received when returning from the World Wars and Vietnam. Men who are victims of sexual violence are just as traumatized as women. This doesn’t have anything to do with a penis or a man or sex.

‘Triggering’ is disempowering language that has been interjected into the dialogue without thought of its unintended consequences on women’s confidence in their ability to survive and thrive.

Self-proclaimed writer and prostitute, Charlotte Shane, shares a similar sentiment, and in a 2012 article, she states, “To call it rape seems too self-pitying, too histrionic… It automatically implies a level of emotional damage that did not take place…The notion that a man can ruin me with his penis strikes me as the most complete expression of vintage misogyny available…Just as I would like the right to experience my rape as not particularly upsetting, so I recognize the rights of others to experience it as the single most horrible incident in their life… The truth is that it does not suit our social narrative to recognize that a woman can be raped and get on with her life, can maintain sexual and romantic relationships without counseling, won’t think of her rape every day, and won’t see herself as a “survivor” or different in any material way.”

When I first read this article, the perspective caught me off guard. At first, I thought that she must just be in denial that her rape was actually really horrible. But the truth is that some people do recover from rape and other trauma relatively quickly and can move on with their lives without developing PTSD or any other psychological issues. How people recover depends on their level of social support, their life history, genetics, their relation to their assailant, all sorts of factors play into it—but the majority of sexual violence victims do not recover easily, and we cannot let the fact that some people can recover easily imply that everyone can and should recover easily. In the same way, we shouldn’t just assume that everybody who says their sexual assault wasn’t that bad is in denial.

Recently I was talking with a woman who told me that she was lucky to have never been raped, to which she added, “but we’ve all been through telling a man no over and over again to the point that we just give in to his persistence to have sex.” Naturally, I thought she must have been in denial. That’s rape. She may not have considered it rape, but it is never okay to disrespect someone else’s boundaries and to ignore their refusals. I have no right to label her experience or tell her how she should feel about it, but I do have the right to say that people should never have to deal with being so worn down from persistently saying no that they feel their only option is just to give in.

The most common criticism I receive is for just believing a victim’s account without all the facts, before a trial has been concluded. “Guilty until proven innocent!” they claim we place on the accused. But if you don’t believe a victim’s story, then you think that person is lying, which is “guilty until proven innocent” on their part too. I choose to believe survivors because I know that there is almost no benefit whatsoever to coming out as a victim, and the damage that can be done to someone by not believing them can be worse than their assault. So I would rather believe the victim, and if it comes out later that they were in fact lying, then I can take the hit of being wrong. I, as an individual, have no legal power to decide the fate of the accused—unlike a judge or a jury, I do not have to be impartial to every story that somebody tells me. So I choose to stand with survivors.